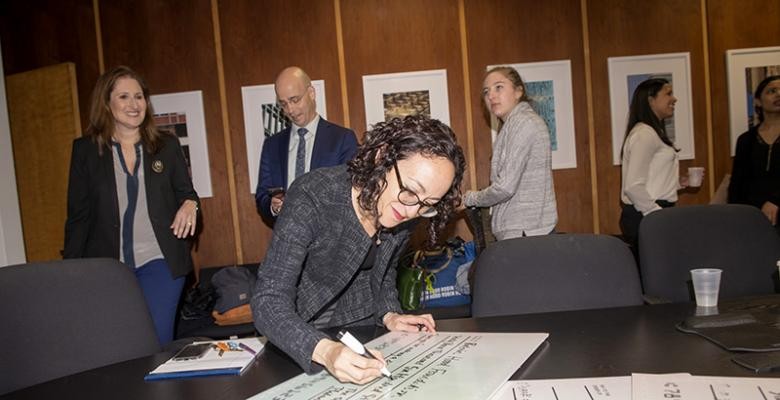 They were students in a new course called “Philanthropy and Social Difference,” funded by a grant from The Philanthropy Lab, a nonprofit that seeks to teach college students about charitable giving by providing them with funds to donate.

“Columbia students are so very interested in social justice,” said Rachel Adams, professor of English and comparative literature, who teaches the course with Victoria Rosner, adjunct associate professor of English and comparative literature and dean of academic affairs at the School of General Studies. “This was an opportunity to make a concrete impact.”

The course focused on homelessness, food insecurity, people with disabilities and the history and philosophy of American philanthropy. Readings included Andrew Carnegie’s The Gospel of Wealth and Other Timely Essays, written in 1889; Bill Gates’ 2007 Harvard Commencement address, in which he urged students to help people living in poverty; and Poster Child: A Memoir, by Emily Rapp, who was the face of the March of Dimes charitable appeal after a congenital birth defect resulted in the amputation of her foot.

The course started small. In the first weeks, each student received $10 and was told to do good with it. Some gave it to a needy person or to an organization; one handed it to a friend traveling to Colombia, where she thought it would go further. Later, the students volunteered at a food pantry and at a gym program for students with disabilities.

Deciding how to distribute the $67,000 was more complicated. Students identified their giving goals, formed three groups to consider possible recipients, researched them and visited the organizations under consideration in person or via Skype.

Each group nominated one organization, and then all the class members decided how to apportion the money. “There was a lot of persuasion, consensus building and listening,” said Rosner (CC’90, GSAS’92,’99).

Once they decided, students wrote letters to the grant recipients, to those who didn’t receive grants and to the Philanthropy Lab to justify the grants.

The class ended on April 25 with a giving ceremony in Lewisohn Hall. The largest gift, $33,666, went to the Robin Hood Foundation, an anti-poverty organization in New York that provides funding and management assistance to some 200 philanthropic organizations. Brooklyn-based Marquis Studios, which provides arts education to public school students, a third of them with disabilities, and Hunger Free America, which advocates for and supports policies and programs to ensure access to nutritious food, split the remaining funds.

“We were able to put into practice what we were learning about philanthropy,” said Michael Rovner, a junior at the School of General Studies who is majoring in economics. “We spent time thinking about what causes matter to us, how often we want to give and how much we can—and want—to give.”

With funding from the Once Upon a Time Foundation in Fort Worth, Texas, The Philanthropy Lab has partnered with 22 colleges and universities since 2011, providing grants totaling more than $5.6 million. It evaluates course proposals before awarding a basic grant of $50,000, and incentives include $1,000 for each student who posts giving goals on the group’s website. (That’s how Columbia students received an additional $17,000.)

Rosner and Adams will teach the course next spring, and then they hope to recruit faculty from other disciplines, who may take a different approach. “Certain courses allow students to bring out aspects of themselves we don’t usually see in the classroom,” Adams said. “It’s very moving to see how they think of themselves going forward.”