Give It Away Now

If you had $100 thousand to give to charity, who would you give it to? It sounds like an easy question, but as a group of students in a philanthropy course at Middlebury College just found out it’s more challenging than you might think.

Long after class is over, students Emmy Masur and Hudson Cavanaugh are in a common space on campus, still discussing the charities they think should receive their money. They were both students in a month-long class given $100 thousand to donate to the charities of their choice. The grant, from the Once Upon a Time foundation, aims to educate students on giving money responsibly. 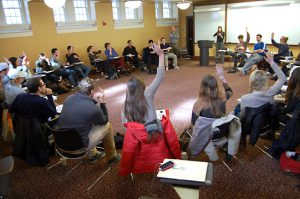 “I lean towards finding the most basic human needs that we can satisfy,” he said. “If we believe one human is equal to one human, we have to give it to sub-Saharan Africa and not here.”

Masur, on the other hand, chose the Addison County Parent Child Center, a small organization that offers support to local families.

“We have this incredible privilege of going to Middlebury. We are able to enjoy this town and get so much from it,” she said. “So for the first time I felt that it was wrong to go here and not give back to the community.”

These arguments touch on some of the major questions this class faced. Is it better to give locally or internationally? To multiple charities or just one? Choose a short-term solution or a long-term one that is more sustainable?

As the decision day drew closer, the tensions became more apparent. Cavanaugh, who found his charity by researching advice from the world’s top economists, felt genuine fear that his charity would be overlooked.

“If we miss this opportunity, I don’t think its fair to say we’re responsible for deaths from neglected tropical diseases,” he said. “But there’s definitely a moral prerogative to make sure they’re treated that is unnerving from a classroom setting.”

Unlike Cavanaugh, the majority of students chose their charity through personal connections and then did research to back up their feeling.

“I’m ok with my emotions being into it because the organization has the stats to back it up,” she said. “So they are not at all resting on emotional appeals.”

On the last day of class, the students met to lobby and vote for the charities of their choice. After hours of discussion and debate they settled on four charities and agreed to average the amounts that each individual student wanted to give.

$35 thousand was awarded to the top two, the Schistosomiasis Control Initiative and Gardens for Health International, and $15 thousand to the bottom two, the Addison County Parent Child Center and Grassroots Soccer.

“All things considered, I’m really happy that it turned out the way it has,” said student Olivia Wold. “I was really excited the whole time, these three and a half hours flew by.”

Ian Stewart, also a student in the class, had another perspective. “We pat ourselves on back saying we did it through diligence, ” he said. “But I’m not sure how much due diligence we did, we just picked one and dug our heels in.”

Sarah Stroup, a political science professor, who co-taught the course, referred to the final decision day “the most invigorating four hours that I’ve had at Middlebury.”

“What happened in our class is a microcosm of what happens when it comes to real giving behaviors of real people,” she said. “People give their time and money for very different reasons.  Those different views are not mutually exclusive, they showed up in these interesting combinations in individuals in the class.”

At a luncheon at the end of the month, the students proudly presented their checks to the chosen charities. As surprisingly emotional and challenging as the month was, it was worth knowing their money was well spent. The students say they plan to continue giving philanthropically, knowing that the time they spent wrestling with these ideas was as valuable to them as they hope the money will be for their charities.